It has been one of those weeks where I'm wondering, "What happened? Yesterday was Monday!" I gave myself a deadline for my current WIP where I'm supposed to finish Cherish (The Valespian Pact, 4), but I have this huge 'farseeing' moment where I'm blowing by that date at record speed. Bwuahahaha! (*cries*). I have this suspicion that Cherish will be closer to 200k than I wanted, but... (looks at the manuscript)... yeah, there is too much that needs to be resolved.
For the reading side of my life, I've been binge reading (mostly, there are a couple different books that started the week off before that). Now I will be the first to say I cannot binge read a series because after about the third book I start getting disgruntled, knitpicky, I-think-I-know-what-is-going-to-happen-and-I'm-angry-with-the-MC. Seriously, that fastest way to put me off a series is for me to try bingeing. There have been exceptions, Kaye Draper's Gesa series is one and Anne Bishop's Others series is another, but for the most part I don't do it unless the author has standalones. I said I'd been bingeing this weekend. That would be Megan Derr. I've been dragon hoarding her releases for the last oh, 18 months or so. I do that sometime with my favorite authors because their stories take me to a special place and if I don't know how soon I'm going to get another 'hit' I will save the book. So like a junky, I gorged on her books this past week and now I'm out again. *sobs into coffee* 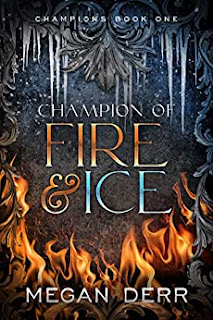 Title: Champion of Fire & Ice
Series: Champions, 1
Author: Megan Derr
Length: 119 pages
Genre: Romance / Fantasy / Friends to Lovers / Tournament /
Notes: Loved this! Cannot wait for the next book.
Blurb: Two years ago, while he was away on a diplomatic mission, Davrin's best friend was murdered in cold blood. Finally home, with the mourning period ended, Davrin is determined to have justice—but as a noble, the law forbids him from fighting Lord Tekker directly. Instead, he must have a champion to face off against Tekker's champion. When he issues the challenge, however, no one steps forward to be his champion, leaving Davrin humiliated and despairing.
Cimar may only be an archivist now, but he earned his spurs the same as any knight, and he hasn't allowed his skills to lapse over the years. Though he did not arrive in time to answer as champion at dinner, he does see Davrin in the dark hours of the night—and infuriates the king, Tekker, and his slimy champion Grayne when he arrives in the morning to make the challenge official.

Though Cimar and Grayne are matched in skill and their rare ability to shift, Grayne and Tekker have the king's favor, and Grayne's hellhound form is nigh unbeatable. If Cimar is going to win the challenge to avenge an old friend on behalf of a man he's always secretly loved, it's going to take every skill and trick at his disposal—and a whole lot of luck. 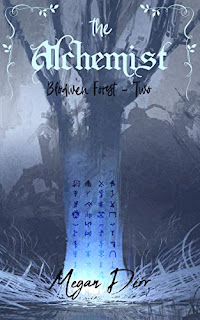 Title: The Alchemist
Series: (Blodwen Forest Book 2)
Author: Megan Derr
Length: 126 pages
Genre: Romance / Fantasy / Fairy Tale / Frenemies /
Notes: I read this series back to back, starting with The Huntsman. It is set in the world of Snow White. Ribald dwarves, evil queen, a black widow curse, and a huntsman who tries to save them all. Both stories were fun to escape into.
Blurb: Marcum sacrificed much to be the greatest alchemist on the continent and a master of poisons rivaled by precious few. Power and standing in his father's court. The chance to build friendships, find romance. His beauty, which was once considered noteworthy, but now is ruined by scars and burns. He is regarded with wariness at best and fear at worst.
Though a recent move to the kingdom of Blodwen, far from his home of Roseberry, offers something of a fresh start, still his ravaged appearance and eccentric ways do him no favors—especially not with Goulet, the handsome, infuriating goblin who will clearly never see Marcum as anything but an ugly, bothersome know-it-all unworthy of the tattoos Goulet inks into all their friends.

Then a goblin is murdered, and Marcum's laboratory mysteriously destroyed, opening the doors on a nightmare that should have ended for good more than a decade ago, but now seems to have returned with vengeance in mind… 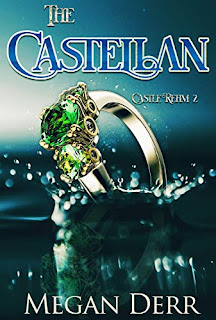 Title: The Castellan
Series: (Castle Rehm Book 2)
Author: Megan Derr
Length: 71 pages
Genre: Romance / Fantasy / Enemies to Lovers /
Notes: This was a sweet romance for me with a side of adventure. I started with the first book, The Succubus.
Blurb: Years ago, Bedros was the right hand lackey to a cruel prince who became a crueler king. He's not proud of the role he played in that cruelty, but those days are well behind him. All he wants now is to take care of Castle Rehm, and enjoy the peace and quiet that comes from being a despised outcast.
That peace is shattered when the very last person he expected to ever see again arrives with dire news: that the king wants a war, and he is going to engineer the slaughter of Bedros and his people in order to get it.

Bedros has very little time to prepare to face the royal army and all the force it can bring to bear, but he'll do everything he can—include cooperate with a man who despises him, whose life Bedros once saved at the cost of everything he once thought he held dear. 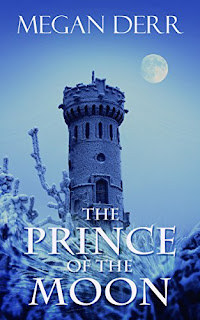 Title: The Prince of the Moon
Series:
Author: Megan Derr
Length: 83 pages
Genre: Romance / Fantasy
Notes: Currently reading this one. I just want to take Solae home with me 'cause his family doesn't deserve him.
Blurb: All Solae wants is to be accepted and loved by the family that has always rejected him. But given it was his late mother who cursed the kingdom to eternal winter, the chances of that happening are minimal. If he can find a way to break the curse, however, surely that would be enough to change their minds regarding him.
But Solae is forbidden to practice magic because of his mother, which limits his ability to pursue solutions. Desperate for advice and new ideas, he contacts a famous curse breaker—and has no idea what to do when the man unexpectedly shows up, handsome and friendly and dangerously intriguing. 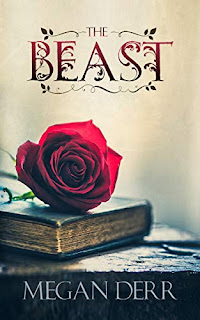 Title: Beast
Series:
Author: Megan Derr
Length: 135 pages
Genre: Romance / Fairy Tale Retelling / Fantasy /
Notes: This is next on my binge list.
Blurb: Alcor has it all: wealth, popularity, power. Whatever he wants, he has only to snap his fingers. He spends his days doped on dragonweed and enjoying the latest person seduced into his bed. He is cold, selfish, and cruel.
Then a dark faerie shows up at his birthday party, and a night of drugs and debauchery turns into a nightmare of fire and blood, killing everyone—except Alcor.

Instead of death, Alcor is left disfigured and cursed, unable to die, forced into a life of solitude, and his only hope for salvation is that someone can learn to love a beast… 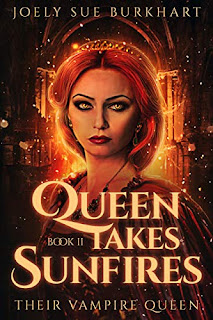 Title: Queen Takes Sunfires 2
Series: Their Vampire Queen
Author: Joely Sue Burkhart
Length: 206 pages
Genre: Romance / Paranormal / Urban Fantasy / Vampires / Mythology /
Notes: This is the second book in the Sunfires Trilogy. Where I thought the last few books in this series were a little too short, this one is not. The pacing was great. Nothing felt rushed which is excellent because Karmen has a horrific background to deal with. I loved everything about it.
Blurb: A secret burns inside me that will very likely get me killed.
The wolf king may have gotten me out of Chicago alive, but he couldn’t burn rubber fast enough to get away from me once he’d dropped me off at his sister’s. Wearing nothing but a hospital gown and his borrowed coat, I have to face an Aima queen for the first time. Alone.

Luckily, she has enough scruples to fill me in on some vampire queen basics without trapping me into a sibling alliance without my knowledge. There is so much about this world that I don’t know. I’ve never lived as a vampire queen. I’ve certainly never fed.

I have no one on my side. No Blood of my own. I don’t know who to trust.

With Soldiers of Light and blazing sunfires on my trail, I’m trapped. I’ve got nowhere else to go.

But they aren’t taking me back to Heliopolis alive.

Note: Karmen is recovering from abuse with flashbacks to her past, which may be triggering to survivors of sexual assault. 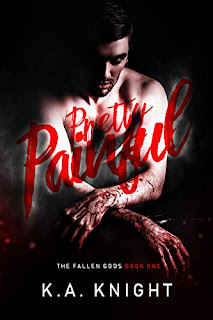 Title: Pretty Painful
Series: (The Fallen Gods Book 1)
Author: KA Knight
Length: 166 pages
Genre: Erotic Romance / Urban Fantasy / Sleeping Pantheon / Dark Romance /
Notes: This is a bit on the dark side with references to previous rape and death of a loved one. There are seven sleeping gods and this series is about them waking up, finding their mates, and perhaps taking over. I've only read this one so far so I'm guessing here.
Blurb: Seven sons, each with a bloodline of supernaturals that can be traced back to them, but where did they go?
Humiliation, pain and hunger become Dabria’s everyday life as a captive but when she is forced to watch the one person in the world she loves die...what will she become?

Rising from the blood and ashes, Dabria is tossed into a cell and left to rot...only she isn’t alone.

A monster so feared they locked him up and threw away the key...and now, he has his sights set on her.

Nothing is safe from him, not her body nor her mind, and definitely not her heart.

Gather around, little ones, this is the beginning of the end.
Thank you for stopping by and reading!!
at February 26, 2021