Caledonia Destiny is different from other books that I've written. One, this is my first attempt at a historical, and two, as such the pros is as close to the era as I could get and still have it be good reading. That took a lot of effort and I ended up messing up the manuscript, then spending months attempting to fix it. During the process, I learned a lot about myself. The research side of me would like to try this again, the editing side of me, not so much. LOL!

Caledonia Destiny is about the slow demise of the wyrbears, an altered curse, and two star-crossed lovers. I hope you enjoy the story. 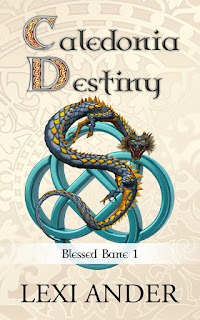 A twist of fate changed both their destinies.

The wyrbears, once a long-lived species, were being lost to the forest in their prime. A people borne of a curse, their abilities not a gift but something wrongly taken, they nonetheless live in harmony with their animal spirits. But over time the curse they lived under changed, mutated, and now what once was a refuge from the world when they became too weary is culling mathan in their prime.

Ewen mhic Friscalach, the leader of his peoples, lost his father too early and is now a widower with four children. The vow he made as a youth to break the curse afflicting wyrbears has been buried by grief and responsibility.

Roi mhic Alric, a priest of Cerridwen and seer, watched his fellow priests slaughtered and his temple desecrated. The only thing that kept him going the last three horror-filled years was the vision Cerridwen had granted him of his emancipation. If freedom came at the cost of his life, well, he was more than ready for the Otherworld.

A fated meeting upon a bloody field of battle. A wrong done long ago. Their choices could save a people… or send them into extinction. Either way, their love will be legend. 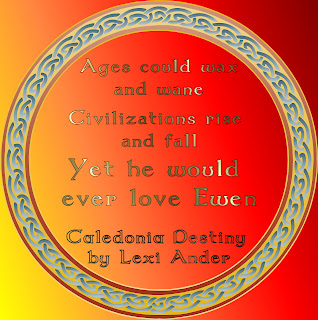 
From the corner of the room, Roi quietly watched Ewen interact with his men. The day’s happenstance freshened in his mind. Of a sudden, the cottage was too hot, the walls too close, the too loud voices of Ewen’s kin becoming the sound of a thousand ravens’ calls. All of it drove Roi from the room, out into the dark of night.

Cold rain pelted down upon him. Roi turned his face up to where he could feel the moon hid its light behind dark clouds and beseeched her to give him strength. The very essence of Roi’s soul seemed to be leaking from his eyes, mixing with the stinging, fat drops that fell from the sky. Roi’s head throbbed dully, his skin too tight, overstretched by his swollen and bruised visage. His arms and legs ached, his ribs tender to the touch, but none of it rivalled the pain that mauled his heart, stealing his breath.

He pressed his fingers to his closed eyelids, the warm tears he had no wish to shed spilling over the tips.

“Roi!” Ewen’s panicked cry cut through the night. Rough hands curled around his wrist and drew his hands away from his face, but Roi did not open his eyes.

Roi drew in a gasping breath. “Is this what one feels when they have a home, a people, someone they love? This be what I have yearned for with all that I am, and yet I find I be inadequately equipped for such bountiful gifts.”


Thank you for stopping and reading!!