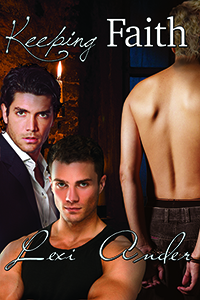 The end of November 2014, Keeping Faith released just two weeks after my father passed away. I didn't do as much promotion as I could've--the reason is sorta obvious.

Earlier this week, I got a pleasant surprise when Rainbow Book Reviews tagged me in a wonderful review for it.

This is the only contemporary series that I've written. The first book, Playing For Keeps, is free novella and is well liked. It started from a story prompt asking for a poly romance of an existing relationship. Most poly/menage stories are about how the people came together and formed the relationship so the request was unique. Playing For Keeps was one of those stories that came to me rather quickly and practically wrote itself. Those stories are the best kind.

People wanted more of the guys and I thought, sure why not and set out to write a sequel.

I learned many different things about myself in the process. One of them being I cannot write a book with the romance being the plot in a sequel. If it was a different couple that I hadn't written about yet, then yes I could. But as a sequel, when the first book already had the romance as the primacy plot, then no.

I mean, really. It seemed wrong to insert something in-between the guys just to have conflict. I like the connection between the three, it is strong. In real life, menages have to be or the relationship will only ever be temporary.

For a lot people, when they get the relationship right, then they don't sweat the small stuff. Plus, the small stuff isn't interesting to write about so that leaves the bigger issues. I touched on one in Keeping Faith, the lack of legal equality for menage relationships, but I didn't want the story to be soapbox. The world we live in is years away from considering marriage for three or more people. I didn't want it to be a soapbox for bullying either. So I focused on the bumps in the road the guys crossed in their careers and family.

Somewhere along the way, it turned into an action and adventure. I liked it. The story revealed the strengths and weakness of the characters. Plus, (I'm trying to say this without giving away spoilers) I liked how part of the story was about different kinds of strengths. Loving someone so much you'd sacrifice yourself for their safety, being the one to save oneself, and being your own hero--especially when you're seen as weak in comparison to others.

There were other things that I enjoyed writing about. The secondary character, The Gentleman, was one. If you hated Trent's father in Playing For Keeps, the disgust will only deepen in Keeping Faith. We learn more about Brock's and AJ's families. AND this is the only published story that has a backdrop of the Christmas Season.

If you haven't looked at the Unshakable Series, give it a chance. It's more than what it seems. :D 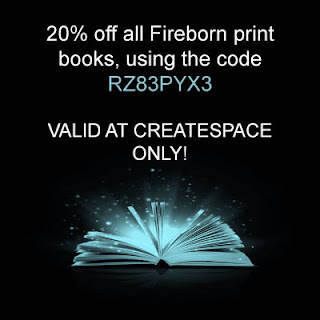 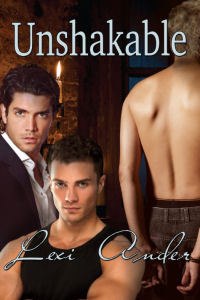 For a limited time, the paperback for Unshakable, which includes both Playing For Keeps and Keeping Faith is 20% through Createspace using the code listed above.

You can download Playing For Keeps at: Fireborn Publishing | All Romance

College running back, Trent Harte, has been living with his lovers, AJ Barnes and Brock Everett, for two years. Caught in a compromising position, rumors abound. It's hard enough to be an openly gay football player, but gossip and snide comments only adds to his stress. Threats against his partners causes Trent to wonder if he should step back from the relationship.

AJ and Brock know there is something wrong when Trent begins to pull away. A call from Trent's father only adds to his distress. AJ and Brock refuse to let him shoulder the responsibility alone and they call for help. Will Trent find the strength to withstand the pressure and hold on to those he loves? Or will AJ and Brock be too late to convince Trent that they are playing for keeps?

Trent, Brock, and AJ are excited to spend Christmas together in their new home but secrets and dark dealings by Trent's estranged father interrupt their plans. Brock is kidnapped and Trent and AJ scramble to find a way to get Brock back before it is too late.Several months after Trent Harte was drafted into the NFL, he, AJ Barnes, and Brock Everette are settling into their new home in Miami. Christmas is approaching and they are excited to share another holiday season with each other. Unbeknownst to them, William Harte, Trent's estranged father, double-crossed a deadly adversary and then disappeared. To draw William out of hiding, Trent becomes a target. In a horrible twist of fate, the kidnappers grab Brock instead, leaving AJ and Trent scrambling to find a way to get Brock back. Detectives believe Trent is responsible, and with each passing hour the likelihood of Brock returning home alive dwindles.

Brock traded his safety to ensure his lovers were out of harm's way. He would do it again even knowing he'd end up captured and restrained in a part of town that no one in their right mind would willingly go. The kidnappers are terrifying, but Brock is a fighter, holding on to hope with both hands. He must decide to either wait to be rescued or find a way to escape. Stuck between the wills of a ruthless assassin and an insane mob thug, something needs to happen soon or he'll never see Trent and AJ again.

I usually love putting together my favorite reads of the year, but I didn't think that I would have much to share, since I re-read my fa...