What am I doing? Well... I might have jumped the gun thinking that Cherish (The Valespian Pact, 4) would be finished last week. Oh, look! Another week has gone by and I still can't type 'Fine'. I've been pushing to complete the book because the end is so very near. But there are also many exciting things going on with the story that added more story and I trying to exercise discretion and NOT SPILL ALL THE BEANS! I'm so excited but I have got to keep some revelations for later. I keep telling myself that... looks at manuscript and scribbles out series spoilers... well, it seems that might be a work in progress. 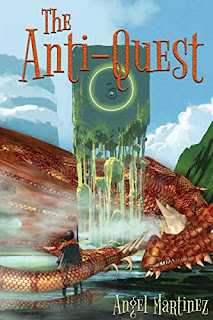 Title: The Anti-Quest
Series: (The Pudding Protocol Universe)
Author: Angel Martinez
Length: 178 pages
Genre: Romance / Sci-Fi / Fantasy / Action Adventure / Lesbian
Notes:
Blurb: Brave paladin. Royal princess. Fierce dragon. Simple. Being all three at once? Way too complicated.
Paladin Snillek's mother was human and ruled a planet. That's about the extent of her knowledge since they didn't see each other much. When her mom dies in a freak accident, her father tells Snillek she's inherited the title, and she has to learn how to pass as the mostly human Princess Siel for a planet she never thought about much. The dresses alone are horrifying and the courtiers aggravating.
​
In a moment of frustrated rage, Snillek's princess persona slips and frightened palace staff misinterpret what they see. Now Paladin Snillek has been called upon to rescue Princess Siel…from herself.

Gruyere wants desperately to journey into the wilds of Tarribotia, but it's too dangerous to go alone and so far, everyone's laughed at her for suggesting it. When she spots a Dzedek paladin sulking in a tavern, she offers her services, hoping to pass herself off as a rogue guide.

Two women with secrets and possibly opposing goals head out into the hinterlands of a planet neither one of them knows well. They might both make it back by Winterfest if nothing eats them first.

This book contains one out-of-her-element paladin, the perils of academia, deadly cake, and unconventional dragons. 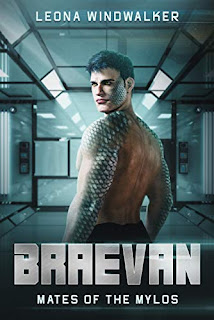 When our parents died, I thought for sure my university days were over. I had a younger brother to look after, and he needed me. I couldn't turn him over to someone else just so I could work more hours in order to attend classes at least part-time. The Mylos scholarship program's expansion to include gay males sounded just the ticket! I currently didn't have a boyfriend, so there was no one to object to them checking if I was a one in a gazillion chance match to one of their warriors. The scholarship money would pay for my schooling, housing, and provide a stipend for food and other expenses for us both. It was too good to pass up. It was the solution to most of our current problems, I was sure of it.

When the Bride Treaty's program was expanded to include males such myself, my hearts and mind became filled with hope. Was my mate one of the males below, thirsting for knowledge and open to finding their forever love? Matches were rare, and I knew that the odds of it happening were only one out of so many billions. One chance in however large a number was still one, though, not zero, and so every single day, I gaze out the windows as I walk down the corridors to my duty station. Please, let him be there. I am ready, my arms and hearts open. 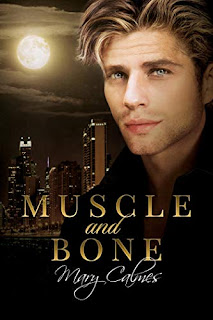 Title: Muscle and Bone
Series:
Author: Mary Calmes
Length: 338 pages
Genre: Romance / Paranormal / Fated Mates / Detective / Mystery / Gay
Notes:
Blurb: You belong to me and I know it down deep, in muscle and bone, where my wolf lives.
Avery Rhine isn’t an average homicide detective with the Chicago PD. In fact, Avery isn’t an average anything. Sure, as an omega he knows he’s at the bottom of the food chain, but that’s never slowed him down. He’s got a great life, complete with a loving family and a best friend who’d take a bullet for him, so what more could he possibly want or need? Except, maybe, for the world to change. And to find someone to spend more than one night with, but that isn’t high on his list of priorities. He’s never been one to believe in destiny or whatever else the fantasies sell about there being someone special out there meant just for him.

Then a chance encounter at a party changes everything.

Graeme Davenport has no delusions about finding his true mate. The consensus is that if an alpha doesn’t find their other half by the time they’re thirty, the chances of it ever happening go from slim to none. He’s not a mere alpha, though; Graeme is a cyne who sits at the pinnacle of lupine hierarchy, so he’s obligated by tradition and duty to choose an omega now, sign a contract, and bond with him. Love is not part of the equation.

When Graeme and Avery meet, their fierce attraction to each other flies in the face of reason and logic. Avery’s intense physical reaction to the alpha is something he’s never experienced before, while Graeme, who has always been the soul of discretion, loses all his inhibitions to desire for the man he wants to possess. They are two very different men trying to navigate expectations, separate reason from innate primal drive, and do it while working together to solve a murder.

It will take everything they are to find a middle ground, and to learn to trust in a fated kind of love. 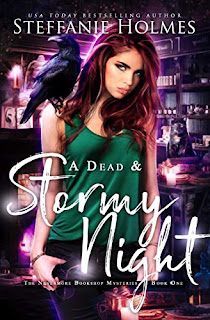 Title: A Dead & Stormy Night
Series: (Nevermore Bookshop Mysteries Book 1)
Author: Steffanie Holmes
Length: 302 pages
Genre: Romance / Slow Burn / Urban Fantasy / RH
Notes:
Blurb: What do you get when you cross a cursed bookshop, three hot fictional men, and a punk rock heroine nursing a broken heart?
After being fired from her fashion internship in New York City, Mina Wilde decides it’s time to reevaluate her life. She returns to the quaint English village where she grew up to take a job at the local bookshop, hoping that being surrounded by great literature will help her heal from a devastating blow.

But Mina soon discovers her life is stranger than fiction – a mysterious curse on the bookshop brings fictional characters to life in lust-worthy bodies. Mina finds herself babysitting Poe’s raven, making hot dogs for Heathcliff, and getting IT help from James Moriarty, all while trying not to fall for the three broken men who should only exist within her imagination.

When Mina’s ex-best friend shows up dead with a knife in her back, she’s the chief suspect. She’ll have to solve the murder if she wants to clear her name. Will her fictional boyfriends be able to keep her out of prison?

The Nevermore Bookshop Mysteries are what you get when all your book boyfriends come to life. Join a brooding antihero, a master criminal, a cheeky raven, and a heroine with a big heart (and an even bigger book collection) in this brand new steamy paranormal mystery series by USA Today bestselling author Steffanie Holmes. 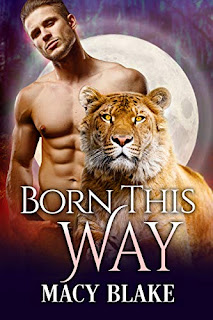 Title: Born This Way
Series:
Author: Macy Blake
Length: 143 pages
Genre: Romance / Paranormal / Fated Mates / Gay
Notes:
Blurb: Even a human like me knows that to a shifter, pack is everything. So when my best friend asks me to check up on her brother—a lion/tiger hybrid who was been banished from his own pride—I agree...
And find out I’m his fated mate.

Hart’s been through a lot, and I know it. The circumstances of his birth made him an outcast, and those scars run deep. He’s also got a million excuses for why he never came back to claim me the way he says he wanted to.

But when he sees me on his doorstep and suddenly decides to make up for lost time… well, let’s just say I’m not falling for it.

Claiming is a forever thing. And nothing about Hart Sherman with his fancy career and solitary lifestyle says he wants forever with small-town guy like me.

If he wants me to believe he’s serious, he’ll have to prove it. By finding a place in the pride for the amazing man he made himself… and for the liger he was born to be.