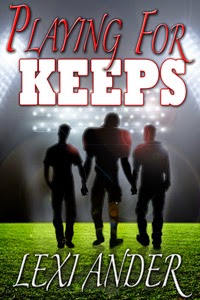 College running back, Trent Harte, has been living with his lovers, AJ Barnes and Brock Everett, for two years. Caught in a compromising position, rumors abound. It's hard enough to be an openly gay football player, but gossip and snide comments only adds to his stress. Threats against his partners causes Trent to wonder if he should step back from the relationship.

AJ and Brock know there is something wrong when Trent begins to pull away. A call from Trent's father only adds to his distress. AJ and Brock refuse to let him shoulder the responsibility alone and they call for help. Will Trent find the strength to withstand the pressure and hold on to those he loves? Or will AJ and Brock be too late to convince Trent that they are playing for keeps?

Trent, Brock, and AJ are excited to spend Christmas together in their new home but secrets and dark dealings by Trent's estranged father interrupt their plans. Brock is kidnapped and Trent and AJ scramble to find a way to get Brock back before it is too late.

Several months after Trent Harte was drafted into the NFL, he, AJ Barnes, and Brock Everette are settling into their new home in Miami. Christmas is approaching and they are excited to share another holiday season with each other. Unbeknownst to them, William Harte, Trent's estranged father, double-crossed a deadly adversary and then disappeared. To draw William out of hiding, Trent becomes a target. In a horrible twist of fate, the kidnappers grab Brock instead, leaving AJ and Trent scrambling to find a way to get Brock back. Detectives believe Trent is responsible, and with each passing hour the likelihood of Brock returning home alive dwindles.

Brock traded his safety to ensure his lovers were out of harm's way. He would do it again even knowing he'd end up captured and restrained in a part of town that no one in their right mind would willingly go. The kidnappers are terrifying, but Brock is a fighter, holding on to hope with both hands. He must decide to either wait to be rescued or find a way to escape. Stuck between the wills of a ruthless assassin and an insane mob thug, something needs to happen soon or he'll never see Trent and AJ again.

I usually love putting together my favorite reads of the year, but I didn't think that I would have much to share, since I re-read my fa...